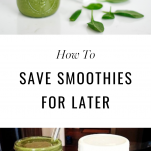 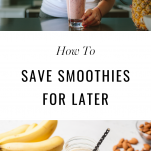 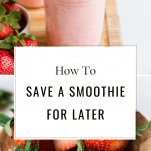 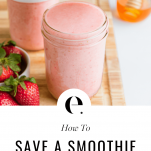 Want to know the best way to save a smoothie or juice for later?

"Cook once, eat 2 or 3 times" is one of my favorite kitchen mantras.

Fresh is always best, but I also love the idea of making a double batch of a smoothie to save time. Saving a fresh smoothie or juice for later is possible if you follow these easy steps!

It's far better to have a smoothie or juice that you've saved and stored in the refrigerator overnight than a bagel or afternoon coffee break.

To Save a Smoothie for Later, The Most Important Step Is To Prevent Oxidation

The main thing that will make your smoothie for fresh juice go bad in the refrigerator is oxidation. Oxidation occurs when the nutrients in your smoothie are exposed to air.

To prevent oxidation, it's important to minimize the amount of surface area that is exposed to air. Do not allow a lot of extra air in the container when you store or save a smoothie for later.

Also, use the proper sized container to ensure that half of your smoothie isn't exposed to air. Follow the steps below and you'll be set!

How To Store Smoothies (& Juices) For Later:

How Long Will a Smoothie Keep in the Refrigerator?

In general, smoothies keep longer than juice. My rule of thumb is that juice will keep for about 12 hours using this method, while a smoothie will keep up to 24 hours if stored properly in the refrigerator.

Just use your eyes and nose to tell - if it smells off or looks dark brown don't drink it. 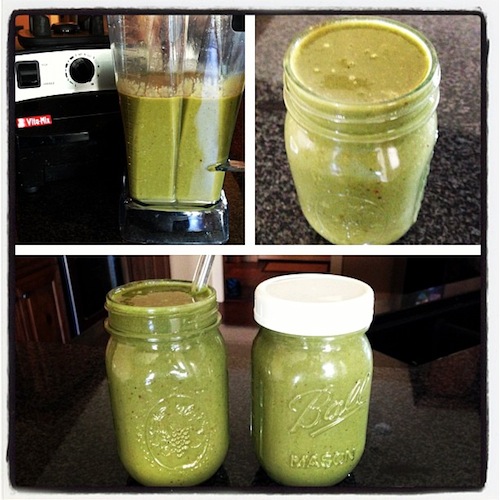 Top Smoothie Recipes to Save for Later

In no particular order: 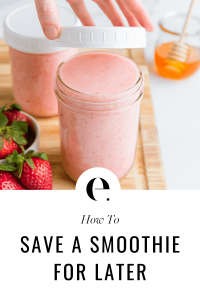