This is the second post in my Epstein-Barr (EBV) series. You'll see the progression of my EBV tests and learn what to ask for if you want to get similar tests. 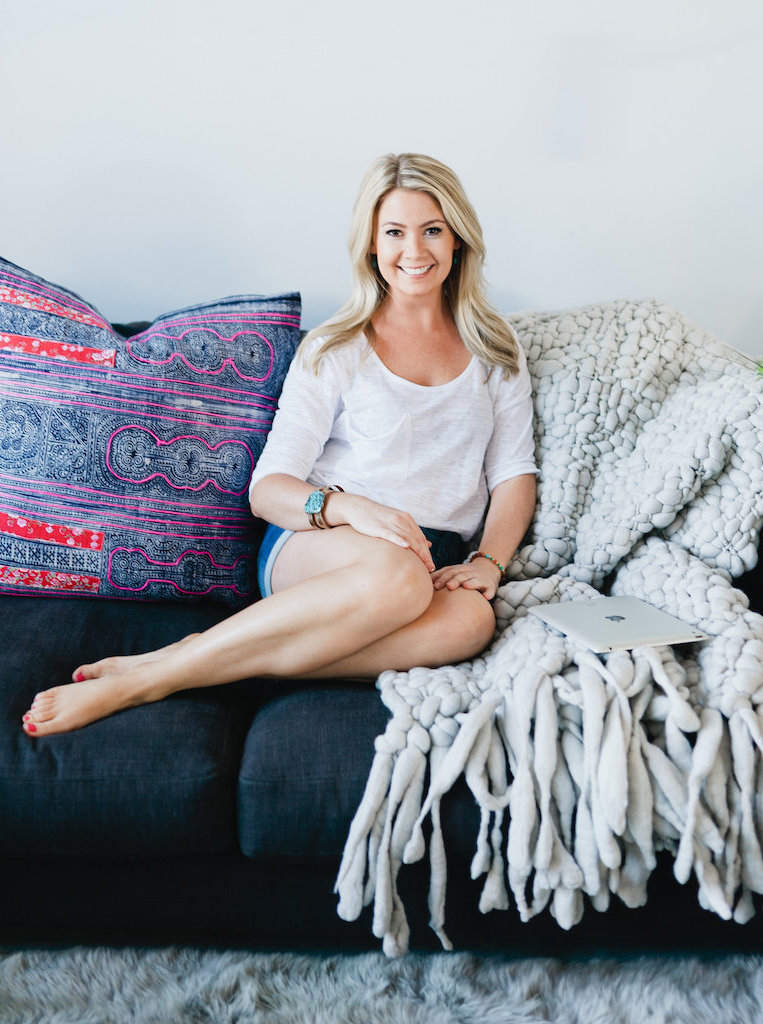 Why Epstein-Barr Testing It’s So Confusing

Before you read this post, I shared my story about how after years of feeling tired and treating my low thyroid condition, I discovered that my Epstein-Barr Virus (EBV) antibodies were showing a recent infection—even though it had been over 15 years since having mono as a teen—if you want to read more of my backstory.

Today I want to share more about the testing I’ve had over the last two years—plus, why it’s so confusing and frustrating for most people when they ask to be tested for reactivated Epstein-Barr.

First, the medical community is just waking up to the idea that we don’t just get mono once, and that the virus can cause issues for decades.

In some cases, it will stay dormant forever after the acute mono phase. But in some people, like me and possibly you, the virus can cause issues throughout life. Again, you can read more about my low thyroid issues and EBV reactivation discovery on the first post in this series. But today I want to focus on testing.

Second, while some doctors and practitioners have long known that EBV can cause autoimmune symptoms or lead to conditions like Chronic Fatigue or Fibromyalgia, most have disregarded this idea.

Since new information is still emerging about the virus and the long-term issues it can cause, there isn’t really a standardized test for it. And other practitioners hypothesize that there are actually multiple types of EBV, which makes it even more difficult to test for.

I was intrigued enough to ask for an EBV test from my naturopath but didn’t know what to specifically ask for so just got the test that she chose from her list of options. It was still a good test, as it indicated a “recent primary infection,” which was enough to understand that my immune system was still trying to fight the virus even though my acute mono phase had ended over 15 years before.

The health community uses the words “Reactivated Epstein-Barr” for this phenomenon, but I wonder if it ever really “deactivated” in the first place. I think a better word for it might be chronic, however, Chronic Active EBV is a specific diagnosis characterized by persistent infectious mononucleosis-like symptoms. There is a huge population that is living somewhere in between—the persistent infectious mononucleosis-like symptoms are gone, but you never fully recover.

Back to the testing.

I’m sharing these tests with you to show you why detecting long-term EBV issues is so confusing.

However, I feel positive that I at least know why I have periods of time when I feel so tired, because now I can do something about it. It’s also comforting to know what could have caused this thyroid issue. However, the testing is still confusing, and I’m still a little confused about it.

Also, please note that I'm sharing these tests with you just as a starting point. I'm not a doctor and these are just for reference.

The image above is my first recent EBV test in September 2016 (15 years after mono), indicating a positive result. My naturopath in Bozeman ordered this test, and to her surprise, it was positive! (Read more about that in my first post in this series.) On this test from Mayo, presence of VCA/IgM antibodies indicates recent primary infection. This was the first indicator that my body was still fighting the virus and was the point at which we started natural antivirals and treatments. Tests that show positive or negative results without values can be frustrating as it's hard to gauge the severity of the situation, but at least it's a start.

This test above was not that helpful and was ordered by mistake when my doctor thought she was ordering the same as the first one. We had tweaked my thyroid replacement dose, so I had to be tested a few months later. I asked her to test the EVB again to see if anything had changed. When the test came back, I realized it was a totally different test than the first.

She mentioned that she must have just checked a separate box, but this one was a good one, too. I don’t blame her or have any negative feelings about it, but looking back on it I should have asked for the other test again, because comparing two different tests isn’t very helpful.

And after researching this test more, I realized that it didn’t tell us the entire picture—it says “None Detected” because it was testing something completely different. She told me that the natural antivirals must be working and to just keep doing what I was doing. I actually did feel a little better, but as you’ll see over the next year in the following tests, the antibodies that indicate a recent infection and that my body was still fighting the virus, were in fact, still there.

May 2017: Five months after the previous confusing test. 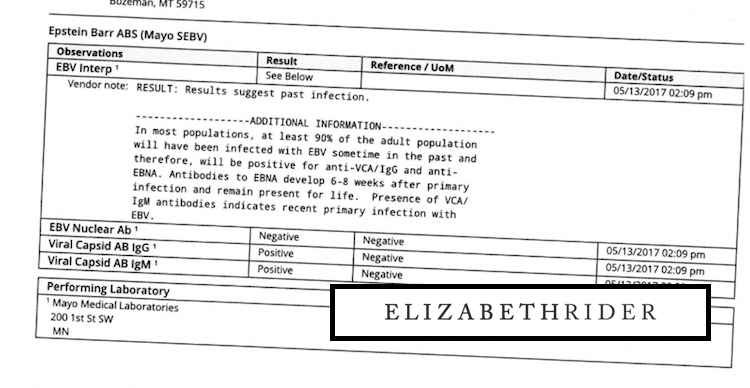 As you can see here, this test indicated the same as the first. When I got this one, my biggest question was, “Would this have shown the same thing in January?” This is why it’s so important to follow up and get the same test so you can do an accurate comparison.

My Most Recent Reactivated EBV Test

May 2018: This one actually has number values, not just just positive/negative results.

My previous tests were with my doctor in Montana. I recently moved to Seattle and started seeing a new naturopath. During my intake, she mentioned that she wanted to do an EBV test. As you can see on this test above, it only tested IgG, not IgM antibodies like tests one and three did. That confused me because high VCA/IgM antibodies indicate a recent primary infection. She said she now uses this test because it actually gives a value of the IgG antibodies, and over a certain number, it will indicate if your immune system is still trying to fight the virus. You can see from the result and reference range above that anything over 10.99 indicates a positive result, and mine was over 41.

I plan to keep up with the natural antivirals I take and continue to explore natural and alternative treatment options. You can read more about my treatment protocol in this post.

Are Epstein-Barr Antibody Tests Even Helpful?

Here’s the bottom line: EBV testing is still confusing for medical professionals, which makes it even more confusing for patients.

Remember that labs are always a snapshot in time, and it's possible that different values can be detected at different times.

Even though EBV testing can be confusing, what’s important is to remember that regardless of what the results are, you can still take steps to feel better.

If you’ve had even one test that comes back positive, it will most likely be positive for a long time—possibly even for life. Since we still don’t know a lot about the virus, what’s most important is that you focus on feeling good and healing if you feel off, instead of focusing on the numbers on a piece of paper.

These tests are useful in the sense that you may suspect EBV, and seeing the result on paper might spur action to healing, but also remember that the virus can live so deep in your organs that the test might show negative, even when EBV is ultimately the issue.

You can start your healing protocol on your own even if you don’t have the test results yet.

How to Ask for a Reactivated Epstein-Barr Test

Find a naturopath, functional medicine specialist, or healthcare practitioner who is open to exploring the possibility of Epstein-Barr.

Do some research in your local area, and always ask the front desk when you call to make your appointment if the practitioner is open to testing for Epstein-Barr. I've found that naturopaths are always very open to this. The front desk can't give you a consult over the phone, but they can at least provide information as to whether the doctor is open to testing for that sort of thing. You may have to call a few places since unfortunately some mainstream/"old-school" medical practices are not up to speed on this yet.

If I were starting over again with what I know now, I would specifically ask for the positive/negative VCA/IgM antibodies test (tests one and three above) and the EBV Early Antigen D (IgG) test (test four above), because both provided good information. If I recall, that first test was around $45 (on top of the cost of the visit), and I paid cash at the naturopath, so it wasn’t too out of reach.

Only your medical professional can guide you on this and will know what tests are available, so work with them to find the best testing option for you. I will say that I had to specifically ask for this and let her know that I was ok paying the $45 for her to order it. That's not a price quote by the way, as I'm sure the charges vary by lab and area.

Is There a Better Test?

New technology is always becoming available, and I want to remind everyone that I’m a patient, not a doctor, so you’ll have to work with your medical professional on what tests are available and best for you. My doctors in Montana and Seattle are both amazing, but they did not have any further tests to conduct.

My doctor at Sanoviv specializes in functional medicine and wants to do a test called ELISpot the next time I visit her to understand if I have any co-infections and to understand the EBV more. ELISpot blood test is sent to Europe for analysis and it's expensive; we would do it for research purposes because we’re both fascinated by it and I have the funds to do it. Since health is my profession, I’m willing to spend on the research, but I want you to know that you do not have to have expensive tests to start your healing. In fact, the results of that test will most likely not change my protocol, it will just scratch our itch to learn more about the virus.

How to Take Action:

1. Read the other posts in this series for more information:

2. If you have an autoimmune condition or low thyroid and suspect reactivated Epstein-Barr, find a naturopath or doctor who specializes in functional medicine and ask for an EBV test. (See notes above about how to ask.)

3. Share your story with us in the comments below to help other people who are dealing with this. Have you had any testing, or do you plan to? What were your results?

4. Subscribe to my newsletter below this post get your first free ebook and make sure you never miss an EBV update.

It actually doesn’t matter that the testing can be confusing. You can still take charge of your own health. If you feel rundown or low in energy, stay hopeful. Living a healthy lifestyle and incorporating natural antivirals into your routine can help manage (and potentially even get rid of) the virus. I’ll continue to write more posts as I learn more (trust me, I’m typing as fast as I can). 😉