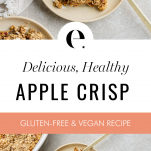 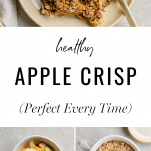 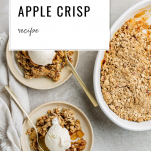 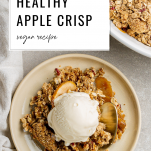 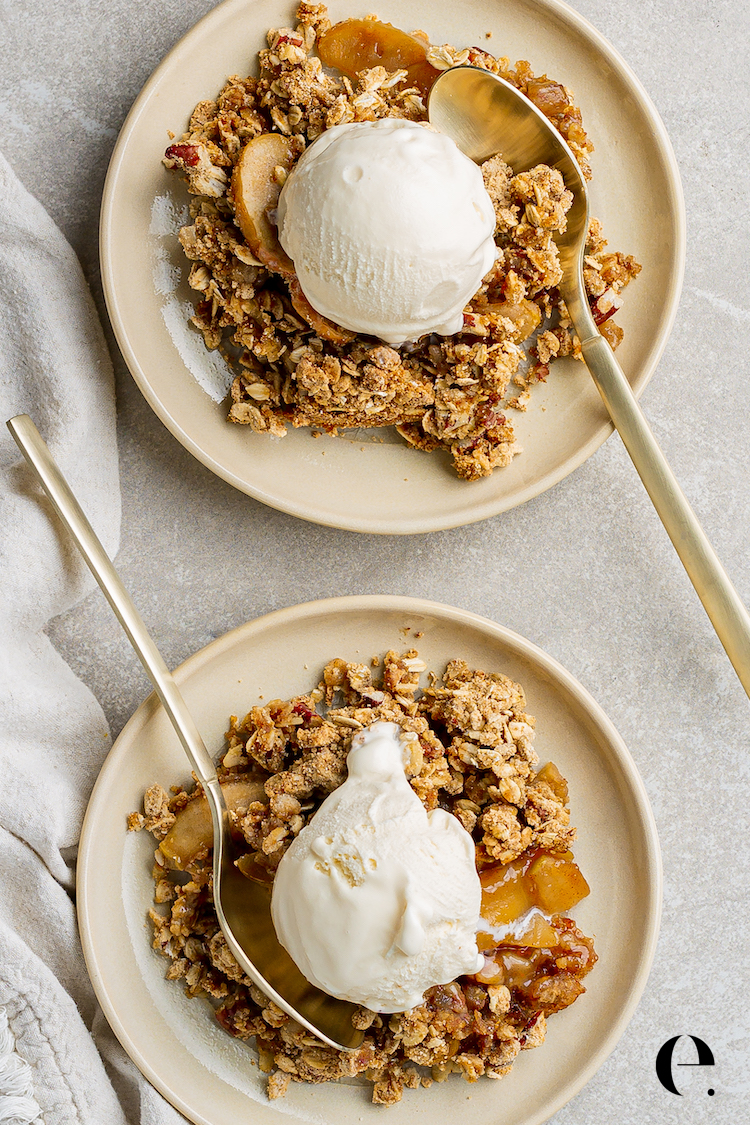 Today I want to share my healthy apple crisp recipe with you because, to be honest, apple crisp is perfection.

What says fall more than apples, cinnamon, and maple syrup? Please don't say pumpkin spice lattes, because apples are the O.G.—nature has delivered an abundance of apples for far longer than chain stores have delivered fancy coffee. But don't worry if you do love pumpkin spice; you can actually put some in your apple crisp if you want. Everyone wins!

What do I love about this Healthy Apple Crisp Recipe?

ONE: For starters, this recipe for apple crisp is great any time of year, but especially in the fall or winter when the apples are still a great price at the store.

TWO: Next, this recipe for healthy apple crisp keeps well in the fridge for up to 5 days, so no need to share it with people if you want to keep it all to yourself. 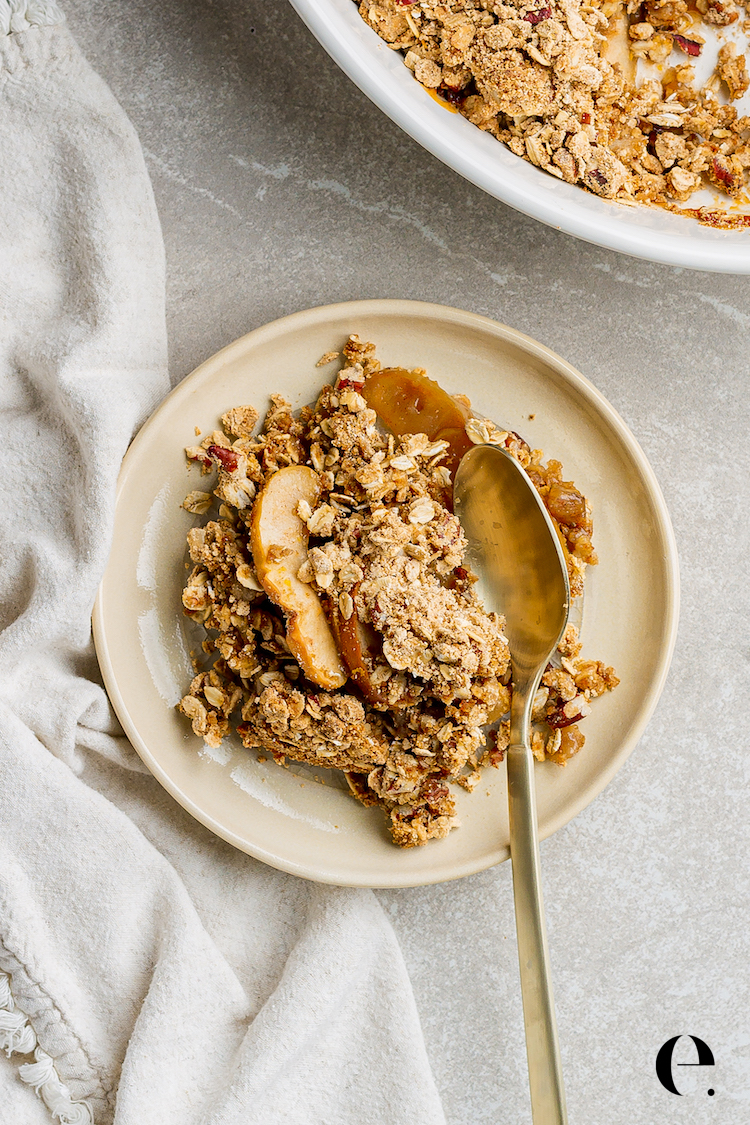 FOUR: Healthy apple crisp is a great recipe to keep in your rotation because it's easy to put together, and it's very forgiving and flexible to boot. It's much easier than an apple pie but fills your home with the same delicious scent. It's basically real love in the air (warm fuzzies included).

FIVE: And finally, everyone loves apple crisp. It's always a crowd-pleaser.

I scoured the internet pulling tips from various apple crisp recipes to create this ultimate healthier version. I loved Ina Garten's advice to add in orange zest and juice, but in my version, the orange juice was just a little too over-powering. However, the zest was a win—it adds a special gourmet twist and worked perfectly.

Coconut crystals (a.k.a. coconut sugar) come from the evaporated sap of a coconut tree. It looks a little like brown sugar and you can find it in the baking section of most health food stores or online. For the maple syrup, make sure you use 100% real maple syrup and not that fake pancake syrup-y stuff, which is mostly just corn syrup (yuck). 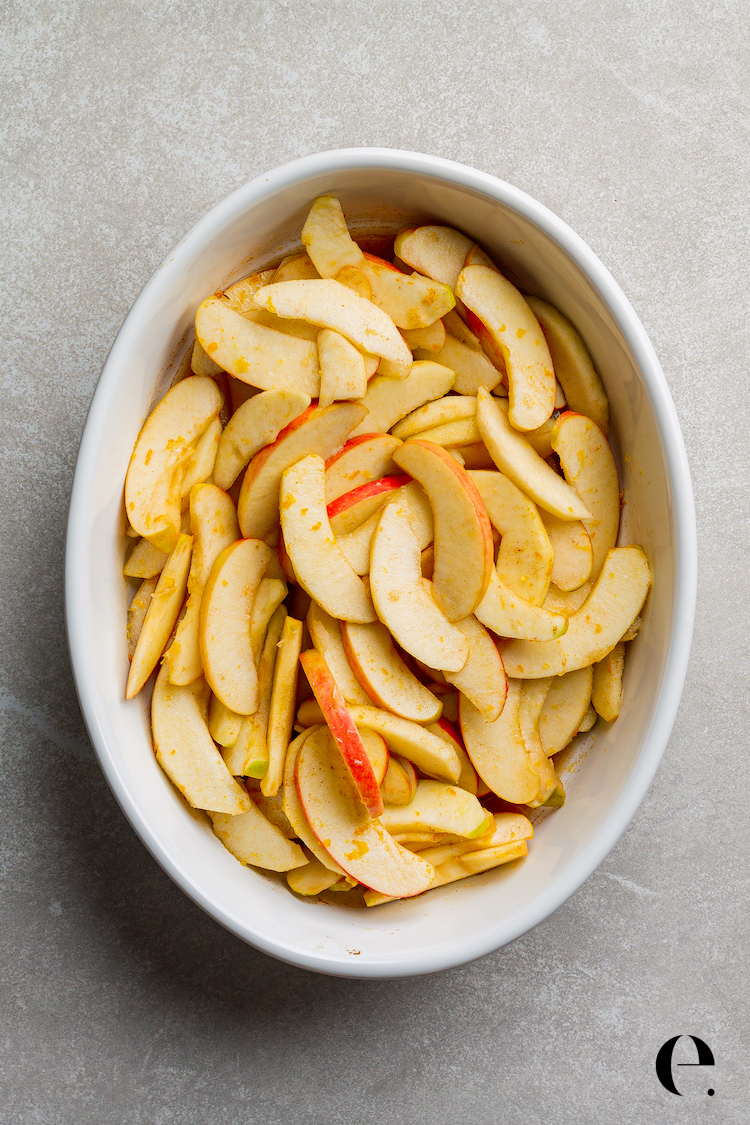 Use organic if possible. As of 2020, apples are still on the Environmental Working Group's Dirty Dozen™ list of the "dirtiest" produce around (in terms of pesticide usage, not dirt ;). More than 98 percent of samples of strawberries, spinach, peaches, nectarines, cherries, and apples tested positive for residue of at least one pesticide. As always, though, do what works best for your budget. Non-organic apples are still way better than a Twinkie or a bag of chips. If you choose non-organic, peel all of the apples. As always, wash all produce—organic or not—before using it.

This healthy apple crisp recipe is vegan, dairy-free, and gluten-free if you make it as written. It's definitely not sugar-free, as it's meant to be a dessert, but it contains considerably less amount of sugar than most traditional apple crisp recipes.

As for a nut-free version, I don't have one just yet, but I suspect you can eliminate the pecans and sub the cup of almond flour for another cup of gluten-free rolled oats and it will work out great.

Whole rolled oats are gluten-free by nature, but most are stored with or near gluten-containing ingredients. So if gluten-free is a priority, look for oats labeled as such. As for me, I buy the organic whole rolled oats in the bulk bins at the grocery store for about a dollar.

This recipe for apple crisp is one of my all-time favorites! It's easy to put together and everyone loves it. If you like, please leave a star rating in the comments below to help other people in our community.

Note: Use an 8x8 baking dish or equivalent.

For the apple layer:

If you make it (I hope you do!), let us know how it turns out in the comments below. 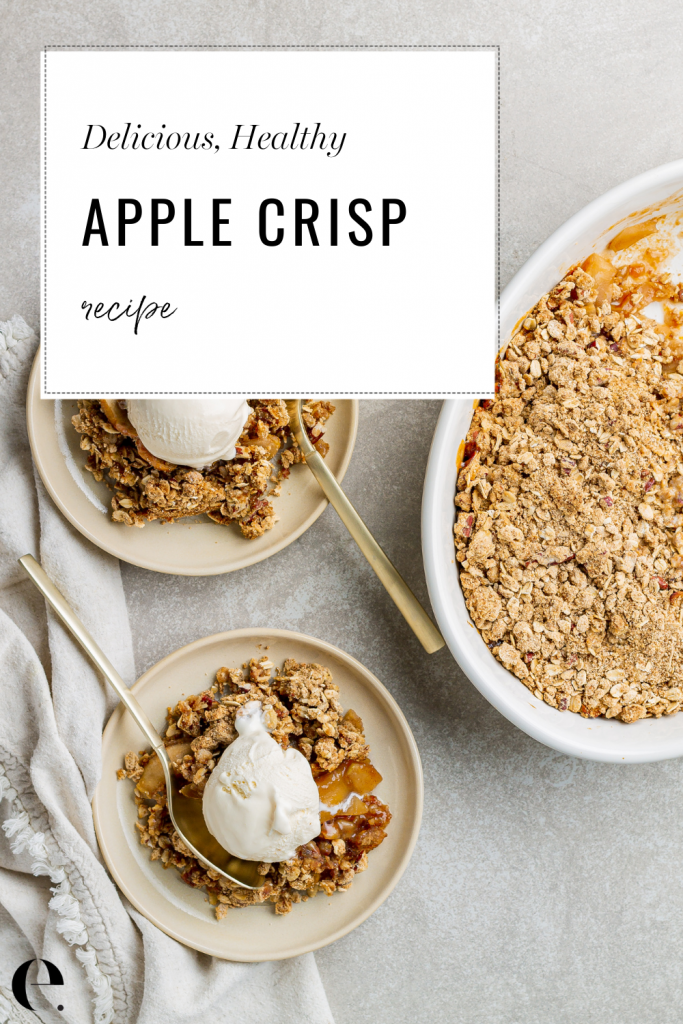