Swipe my 5 super simple healthy habits you can implement TODAY for immediate results.

Get your Recipes & tips!

Yes, You can have both!

The Only Health Book You'll Ever Need

get the instant bestseller

Where has socca been all my life?!

After eyeing socca recipes for a few years and just now finally trying it, I have to admit I feel like I’ve been totally missing out.

If you’re like I was and not familiar with socca, it’s basically a hybrid between a chickpea flour pancake and flatbread. It’s originally from the south of France and north of Italy (where it’s called farinata) and served warm with herbs and often paired with a glass of rosé wine. Um, yes please!

On the health side, socca makes a fantastic naturally gluten-free flatbread, pizza crust, or just bread-like thing to snack on. The base has just four wholesome ingredients: chickpea (aka garbanzo bean) flour, water, olive oil and sea salt. Chickpea flour is simply ground chickpeas and is minimally processed, unlike most grain flours that have had the bran and nutrients stripped out before becoming flour. You can grind dry chickpeas into your own flour or purchase a high-quality chickpea flour at your natural foods store. 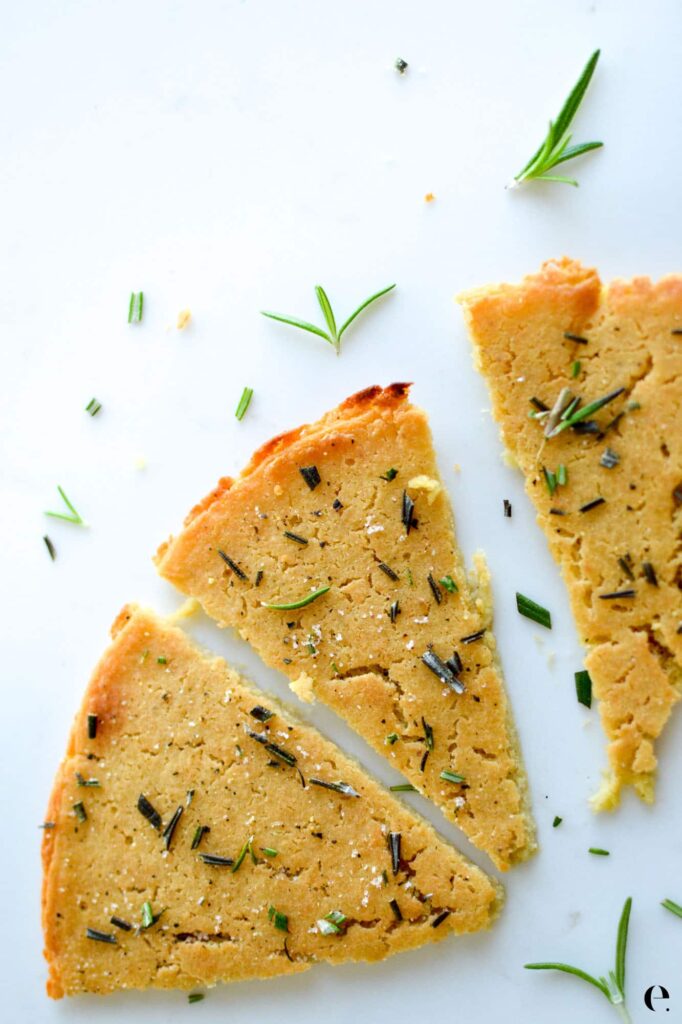 You can even use sprouted chickpea flour like I used here for an added nutritional punch. Sprouted beans and legumes have been soaked and sprouted which makes them easier to digest. I use the one from Thrive Market because it’s organic, sprouted, non-GMO, preservative-free, and a really good price to boot! I buy most of my flours, olive oil, and other pantry goods at Thrive Market because they have great prices and follow their 29 values in all products. Keep sprouted flours in the refrigerator to prolong the shelf life of the product.

Ok, back to the socca. Like I mentioned before, I feel like I’ve been missing out on the socca game so the last few weeks in my kitchen have been all about the socca. Socca pizza, socca flatbread, socca with herbs, and breakfast socca have all make the rounds.

A few tips for success: 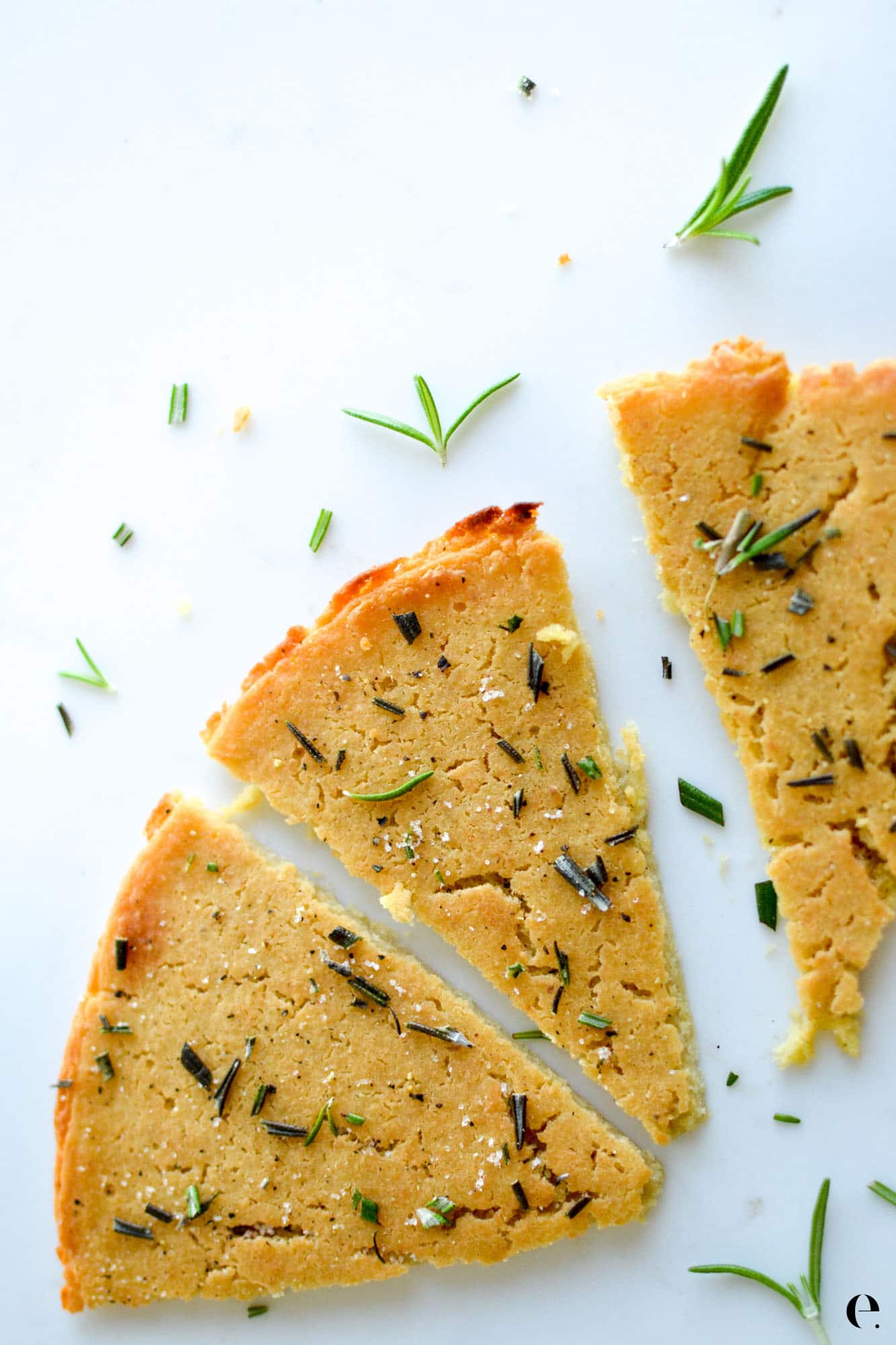 Print
Prep time:
45 mins
Cook time:
10 mins
Total time:
55 mins
Yield: 8
Ingredients
Instructions
Notes
This recipe is for a 12-inch skillet.
If using a 10-inch skillet, adjust the measurements for the batter to ¾ cup chickpea flour, ¾ cup water, 1½ tablespoons extra virgin olive oil and ¼ teaspoon + 1 big pinch sea salt. Still use 1 tablespoon of extra virgin olive oil in the bottom of the pan before cooking.
3.5.3229
If you make it, let us know how it turns out in the comments below. 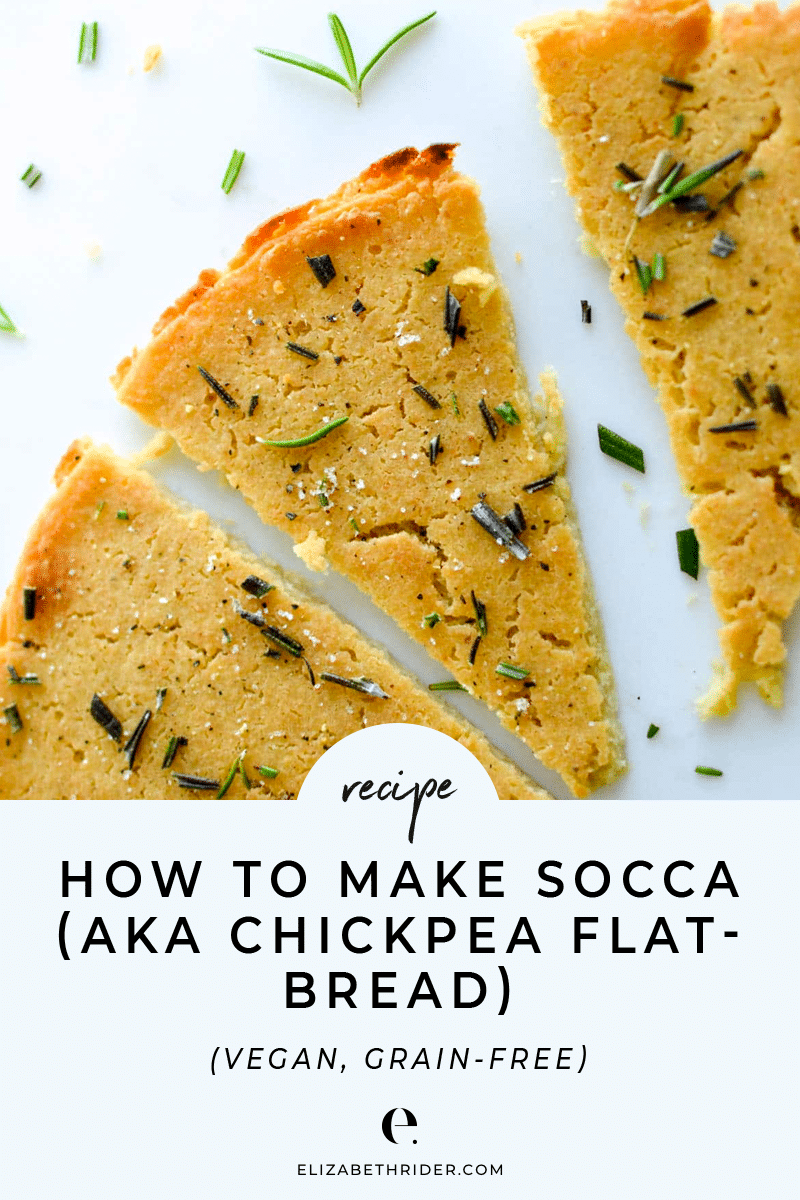 back to the blog

browse the blog for

Anti-Inflammatory Turmeric Tea Recipe (a.k.a. How To Make Golden Milk)

Manuka Honey Face Mask Benefits + How to Do It

How to Make a Flax Egg (Vegan Egg Substitute)

Manuka Honey Face Mask Benefits + How to Do It

How to Get Tested for Reactivated Epstein-Barr (EBV)

Is It Epstein-Barr Virus Reactivation?

Instead of prescribing what I think you should do, I help you find what works for you.

GET YOUR FREE GIFT

“
The ultimate guide to holistic health with practical and inspiring guidance on every element of well-being.

Gabby Bernstein, #1 New York Times Bestselling author of The Universe Has Your Back

Every woman should get this book. Elizabeth has cracked the lifestyle and diet code in a way that will work for anyone, including you!

Elizabeth delivers a clear, compassionate, actionable plan that will serve you for life.

Marie Forleo, author of Everything Is Figureoutable

The Health Habit can help anyone create healthier, realistic  habits for lasting results. It's the best health + lifestyle book I've read in a long time!

Because healthy living doesn’t have to feel like The Hunger Games. You'll get my:

Up your daily routine with my 5 super-easy health hacks—download the guide now!

Anti-Inflammatory Turmeric Tea Recipe (a.k.a. How To Make Golden Milk)

How To Save A Smoothie For Later